Macs are not normally convenient for amateur radio but sometimes it’s useful to make it work for some reason. In this post I’m going to show the steps I took to build the Dire Wolf packet modem on macOS Mojave (10.14.1). It’s based loosely on the Mac OS X instructions in the official Dire Wolf User Guide with a few tweaks based on my preferences, such as using Homebrew.

I go into a bit more detail about setting up direwolf.conf for USB serial PTT control and a USB audio device. Finally I show that it actually works by running Xastir on a Raspberry Pi and forwarding the KISS connection to Dire Wolf on the Mac via TCP. I don’t actually know any software I could run directly on the Mac to test it. (But I’d like to write some, which is how I wound up in this situation!) Normally on Linux you’d use the ax25-apps with kissattach.

I’m going to assume the reader is somewhat familiar with the Terminal app and typing commands into it since this is how Dire Wolf is actually used. I also assume the reader knows how to edit text files, even if they have an unusual extension like .conf.

While you should read the entire file to see what options are relevant to your particular situation, I only had to add or modify three lines to my copied direwolf.conf. The other defaults were fine for 1200 baud VHF radio.

Making it do something

What about transmitting? Well, we see from the console output that it supports the KISS protocol and it’s listening on port 8001. Normally TNCs in KISS mode work over a serial port. Indeed, the APRS program Xastir assumes that if you’re using a KISS TNC it’s serial. So let’s trick it.

Here’s the situation that we’re going to set up.

socat is not installed by default on Raspbian so make sure it’s installed: sudo apt install socat

Then create the virtual port, forwarding it to Dire Wolf. The trailing & puts the process into the background while we run Xastir. Replace 192.168.1.10 with the IP of the Mac. 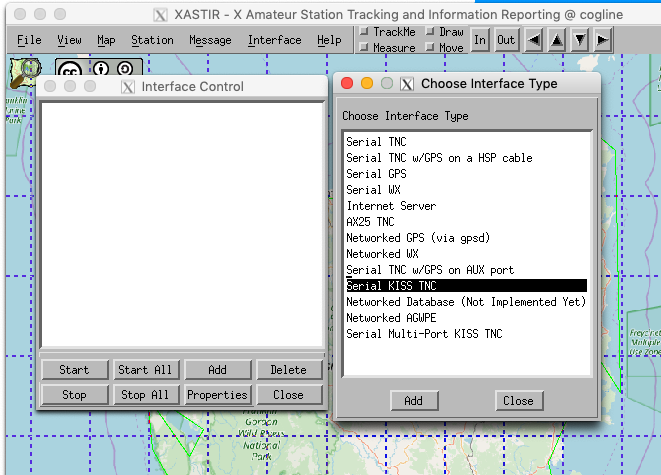 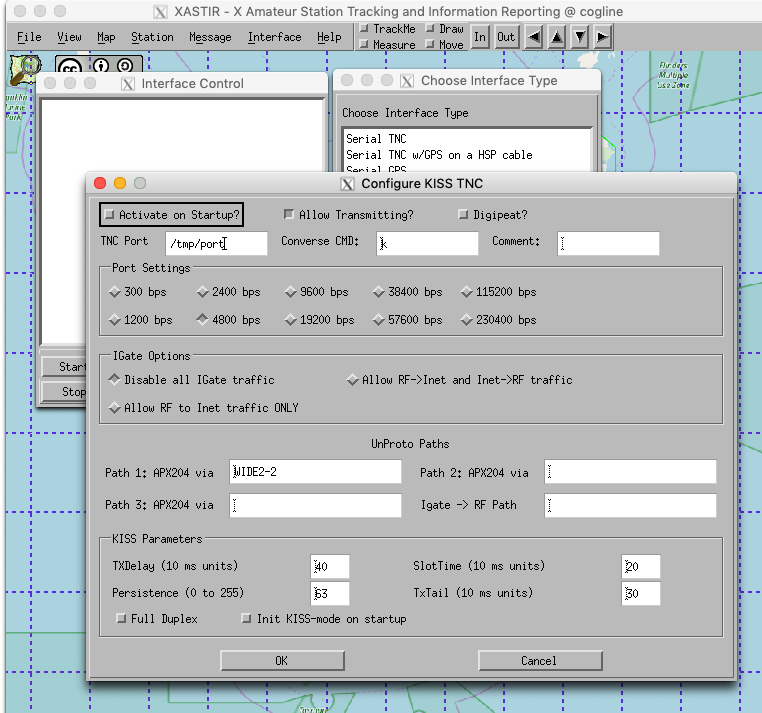 Once I press Start to bring up the interface, Dire Wolf shows that it has received some KISS commands from Xastir.

When I choose Interface > Transmit Now I see that Dire Wolf transmits, both in the terminal and on my radio in real life.

It also shows up in axlisten on my other computer that’s listening on the same frequency, which indicates that my audio output levels are tolerable.

Wonderful! I now have a full-featured KISS packet modem running on my Mac and have tested that it both sends and receives.

I see you're using socat to connect Xastir to Direwolf.


However, if I'm not mistaken, Direwolf and Xastir appear to support an AGW interface.


Direwolf listens on port 8000 for AGW by default, and if you tell Xastir to add a "Networked AGWPE" interface and connect to port 8000, it should connect.


Does that work for you?