Not many people go to LAN parties now, even fewer with the pandemic and all that. I’m one of the weirdos who still hosts them regularly, although things have changed. Within my peer group it’s no longer about competitive play and who has the fastest PC. It’s just a bunch of adults chilling out. This means that only some people have fancy hardware. Others don’t, and they don’t care to spend their money on gaming, which makes it all the more challenging to find something that everybody wants to play¹.

Today I want to say nice things about two games which I’ve played on and off for around 15 years. They’re open source, actively maintained, supported on all major operating systems, playable on old hardware, and a lot of fun. 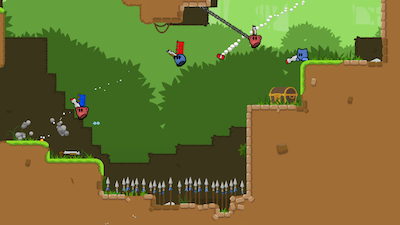 Teeworlds is a fast-paced 2D shooter where cutesy avatars launch projectiles or bonk each other on the head with a mallet (deathmatch mode) or team up to steal the other side’s flag (CTF mode). It’s very much one of those games which is easy to pick up but difficult to master. Even people who don’t regularly play games seem to handle the WSAD movement and point-and-click aiming fairly well. Even when you’re losing, the sheer ridiculousness of the colourful maps and player blobs makes it hard to take it all too seriously. Downloads are on the website but it’s been available on Steam for a while too.

For those who spend some time on the game they’ll find a steady difficulty gradient. There are many ways to lob a rocket so that it lands directly in an opponent’s face, and other weapons require very good accuracy if you want to land a hit every time. The right-click grappling hook is a subtle tool which can have you flying around the map like Tarzan or land you in a world of pain if you mess it up.

There are some difficulties. If you’re located in Australia like me there aren’t many servers that have a reasonable ping and are populated with players. If you want to run your own server there is no GUI for doing so. You need to create a config file and run it from the command line, and refer to the docs for more advanced settings. Creating at least a basic config file is required to jump into a deathmatch with some of your friends. If you’re reading this blog, perhaps you can do that for them! 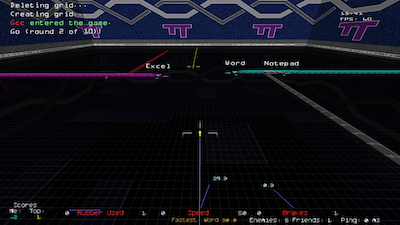 Armagetron is a multiplayer snake game inspired by the light cycles from TRON. In the basic game you are on a fixed-size grid, moving at a generally steady speed, able to turn left or right at angles of 90°. You leave a wall behind you and if you crash into your wall or anybody else’s, you explode and lose the round.

This game is also very good but considerably harder to get into than Teeworlds. In my opinion, out of the box it comes with unintuitive default controls, an annoying default camera, and the “local game” you might try from the main menu has somewhat un-fun settings. One needs to take some time playing on the various online servers—high rubber, dogfight, fortress, capture the flag, sumo—to see how fun the game is when it’s twisted in various ways.

One of the main parameters that makes this a more interesting game is rubber. It appears that it was conceived as a lag-compensation technique. If you’re about to crash into a wall you have a configurable amoung of leeway where you get closer and closer to the wall but don’t really hit it until your supply of rubber runs out, shown in a dial at the bottom of the screen. By default rubber is very low and you crash more or less instantly. If you manage to turn left or right in time, you don’t actually crash and instead find yourself moving in parallel very close to the wall. Now that you’re no longer “crashing”, your rubber can recharge over time. Most game types benefit from a little bit of rubber because otherwise it’s far too harsh and not very fun. Some servers set rubber much higher, which allows you to deliberately grind into a wall, moving back and forth to spend your rubber over and over again. This creates a whole new style of multiplayer competition where you attempt to get closer to the wall than your opponent, to either box them in or escape their trap.

The different game modes have their own strategies to learn and perfect. For example in sumo servers, players start within in a circular ring which is steadily decreasing in size. If you spend too long outside the ring—only a couple of seconds—you explode. In this mode your tail is usually limited to a short length so you have to keep moving to renegotiate your “territory” within the ring.

Armagetron also suffers from a lack of people playing in the Australasian region but you can still have fun with anything under 200 ms or so.

¹ I’m somewhere in the middle. The last game I put significant time into was Overwatch, a couple of years ago.