You could be forgiven for thinking that Firefox, Safari and Chrome are all pretty similar. They’re reasonably fast, they get regular updates and they keep up with the features that web designers want to use.

But you would be wrong. When you look at the address bar in Firefox it is as if to look upon Jeeves the valet. Behind the unassuming façade is a finely tuned machine that has already organised your browsing history with prodigious efficiency.

I rant about the Awesome Bar (which is its real name) passionately from time to time and often people don’t understand why I’m so excited. It’s a different way of browsing the web.

Let’s have an example. Suppose I visit these pages in order:

I can now type dln into the address bar, and here we go:

north of course returns both:

I can filter within those search results by adding another term: north tube

You are guaranteed to match on any part of the URL or the title—including symbols:

The only real limitation is a maximum of 12 search results, so you have to be specific. If you want you can be really, really specific:

What you can’t see from these screenshots is that every time you type something the results update in less than half a second. If you have visited a webpage before you are almost certainly going to find it faster with the Awesome Bar than you will using a search engine.

That’s the basic use—you know that you visited some webpage in the past and you want to find it again. By looking at the results between typing terms you can use it as a increasingly narrow search engine. 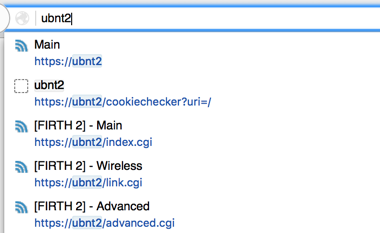 “Oh there it is.” I press the down arrow four times and then enter and I’m there. 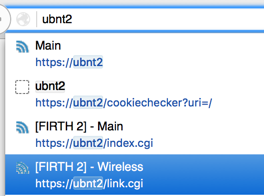 “What was that PDF on the AMSAT site again?”

“Oh yeah, the Fox operating guide. But I want the high-resolution version…”

Now let’s check out how Chrome does. If you type north really quickly it looks so promising:

But about 200 milliseconds after I let go of the the h key it suddenly changes to this: 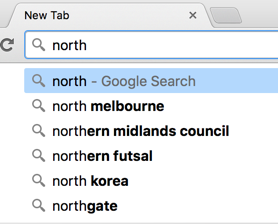 I don’t normally hit computers but when they pull stuff like this it’s really tempting.

Anyway it turns out if I fish around in the “advanced” privacy settings I can turn off the search suggestions:

And now it’s considerably more sensible when I type north:

But uh… yeah that’s about it.

Safari is also sensible about it if you keep it simple…

…but get mildly complicated and it falls apart.

When a tool only works half the time you don’t want to use the tool. It’s useless. Firefox always works in exactly the same way. Chrome and Safari just do their own thing.