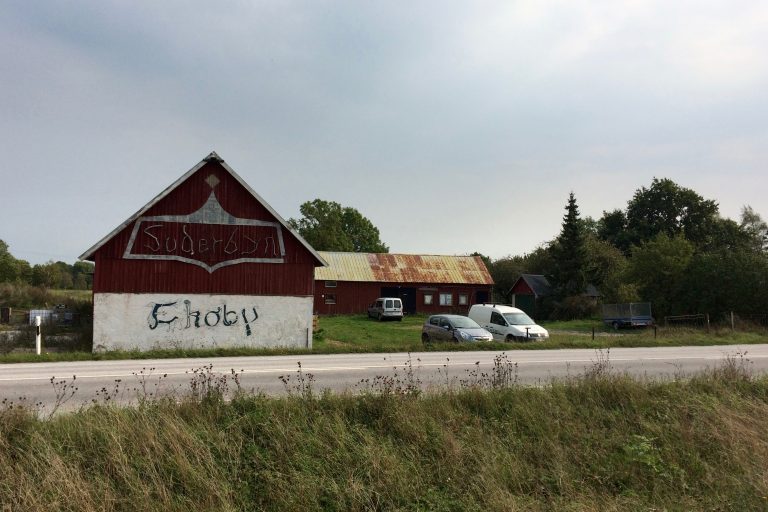 On my birthday this year I was living at Suderbyn, a permaculture ecovillage on the Swedish island of Gotland. I chose not to mention my birthday as they were so dang nice I figured they would make a fuss. (Later I learnt that they typically celebrate birthdays together with a fika, i.e., coffee and cake.)

I hadn’t visited an ecovillage before and I only knew a couple of things from their website. I knew that they were around a dozen people who share their food and come together for lunch every day. I also knew that this month they’re building wind turbines and hosting a construction course with an expert in building Piggott turbines.

A tight-knit community with an interest in home-grown renewable energy sounded awesome so I applied to stay as a volunteer, meaning that I contribute work for cheaper board. The expectation is the same as for residents: four hours per day Monday to Friday, plus attendance at meetings. Ideally visitors would come for several weeks or months. I didn’t have that long so happily they made an exception to let me stay for four days.

At the end of that stay moving into an ecovillage isn’t yet on my to-do list. It was lovely and I could live that way for sure but it’s nothing to rush in to. I could stand to be more vegetarian though. I don’t think I would ever avoid meat when it’s available but it’s sensible for all kinds of reasons to get good at eating well without it. Suderbyn has some fine cooks and as a vegetarian community they’re not missing out. As I write this on the ferry I’m eating shitty nachos and really I’d prefer more of today’s vegan lunch. 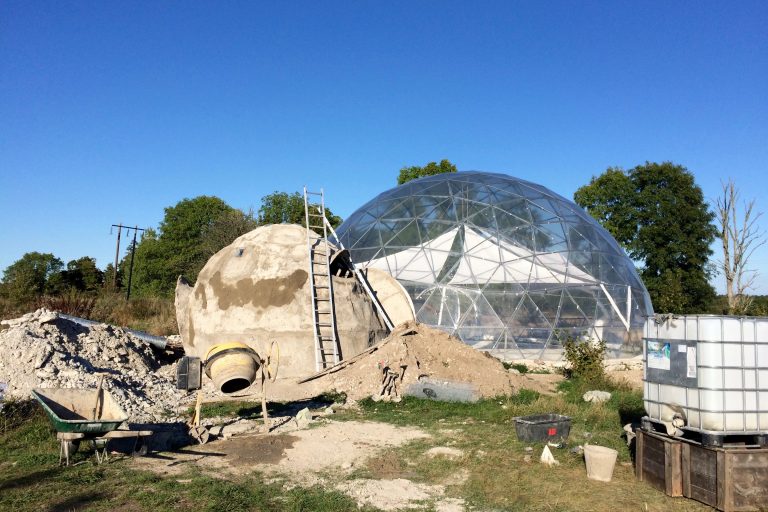 On my first day one of the residents taught me to mix cement and I helped concrete the entryway to their “dome”. It’s a project to build a greenhouse with a small-scale biogas digester inside it. The aim is that plants can be grown inside using the liquid nutrients from the digester and the digester itself can be fed with organic waste, outputting usable methane. The whole thing will be powered by an 800-watt wind turbine outside. Nobody’s sure how well it will work yet but it’s really cool and built entirely by volunteers.

Another day I simply shovelled materials from place to place. The most interesting material was the compost from their toilets. They leave it for a couple of years to decay and I am pleased to report that the end result is fairly pleasant, having the appearance of finely chopped pine bark. That went onto hügelkultur garden beds that will be used next season. All good exercise.

On my last day the construction of wind turbine blades began. I helped as we measured and cut the blades from a rectangular section and proceeded to cut them into blade shapes mostly using a drawknife. Nothing’s changed since high school—I’m still terrible at woodwork. 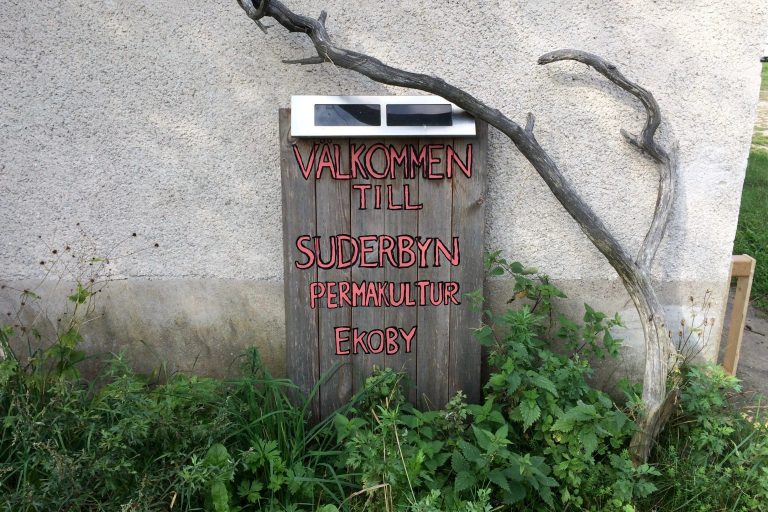 The word “permaculture” is in Suderbyn’s full name so even though I’m on roughly the opposite side of the planet it’s not surprising that when I say “I’m from Tasmania” there’s a 50% chance that someone will say “oh like Bill Mollison?” Bill and David’s work on permaculture sure went global. I’m only familiar with the broad outlines but I’m motivated to read more about it.

My understanding of permaculture so far is that you use principles from the natural world as inspiration for sustainable human activities. Suderbyn had many examples. One of their ponds served multiple purposes, both storing water and reflecting more sunlight onto the main house. They closed the loop of human waste by using composting toilets, the compost ultimately being used on the garden. They used crop pairings to deter weeds and rejuvenate the soil without the need for pesticides or fertilisers. (Note that organic gardening like this is a good idea for more sophisticated reasons than “GMO/chemicals are scary”.)

Suderbyn has been around for eight years and they’ve built up extensive communal facilities in that time. I didn’t take many photos. It felt like a strange thing to do, being a visitor in someone else’s home. More interesting to me in any case is the way they maintain a community that means they continuously improve and build their new ideas.

Anyone who’s spoken to me at length in the last year likely knows that I’ve been heavily influenced by John Michael Greer, an American who writes about ecology and the impending end of the industrial age. (Fair warning to link-clickers: some complain that his writing is pompous and verbose. It kind of is, but I don’t mind.) I first learnt about ecovillages through this fellow and frankly he gave me a bum steer. His broad conception of ecovillages is middle-class people hoping to establish an isolated community where they can escape to carry on in more or less the same level of comfort when shit hits the fan. The folly of such a plan is not hard to demonstrate and I didn’t question it.

His saying “collapse now and avoid the rush” sums up the more sensible alternative—if you reduce your needs now, particularly by using fewer resources and by choosing technologies with lower complexity and energy inputs, you will not only reduce your contribution to the problem but also be better prepared for a time when these things are no longer available or are prohibitively expensive.

It turns out that Suderbyn, an ecovillage, is the finest example I have seen of exactly what he proposes. Although they use their own produce where they can their priority is not being cut off from the outside world. They are trying to close the loop on waste cycles, reusing water, recycling voraciously, and sharing living areas such that everybody is using much less energy. They are also eagerly experimenting with new technologies for localised energy production that could be replicated in communities across the world.

These technologies fall under the banner of appropriate technology, a term derived from the intermediate technology espoused by the economist E.F. Schumacher. Originally intended as a solution for helping underdeveloped countries to build local industry, the idea is that people should be able to meet their needs using tools and equipment that individuals can afford without the need for capital-intensive factories. The name is carefully chosen to be different from “the old ways are better”. It’s not so much about how new the technology is but how sustainable it is and how accessible it is to the average person.

When the twin pincers of fossil fuel depletion and climate change bite hard it is reasonable to expect that capital markets and globalised manufacturing may fall in a heap. Should that happen, widespread availability of appropriate technology—technology that can be built, maintained and used by local communities—will be very helpful in cushioning the impact.

When I look at Suderbyn I see a group of people who have collapsed before the rush. They’re not isolationist—they’re very deliberately a part of the wider world and in a positive way, sharing their projects and knowledge. There is still much more that they can do. But by modern standards their needs are modest and their environmental impact is low. They have the skills, tools and resources to transport themselves, produce food and build things. Most importantly they have cultivated a sustainable community of people where members are happy most of the time and have the opportunity to develop themselves and the village. I’m grateful for my time there. It’s an injection of positivity into an otherwise depressing situation. 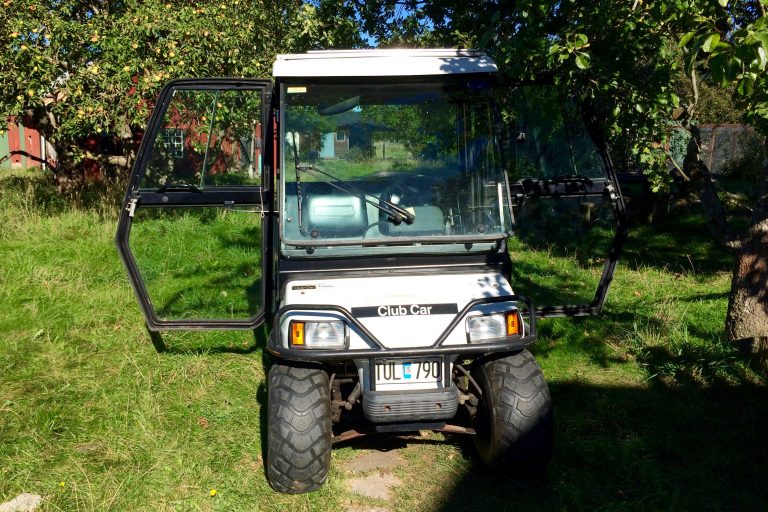