Several Tasmanian amateur radio operators hang out in a Matrix chat room, #vk7:matrix.org. Last week Ben VK7BEN shared a video about a new digital mode called FSQ (Fast Simple QSO), which was developed by ZL1BPU and ZL2AFP. Now four of us in the Hobart area are busily attempting to augment our online chat with a radio equivalent. 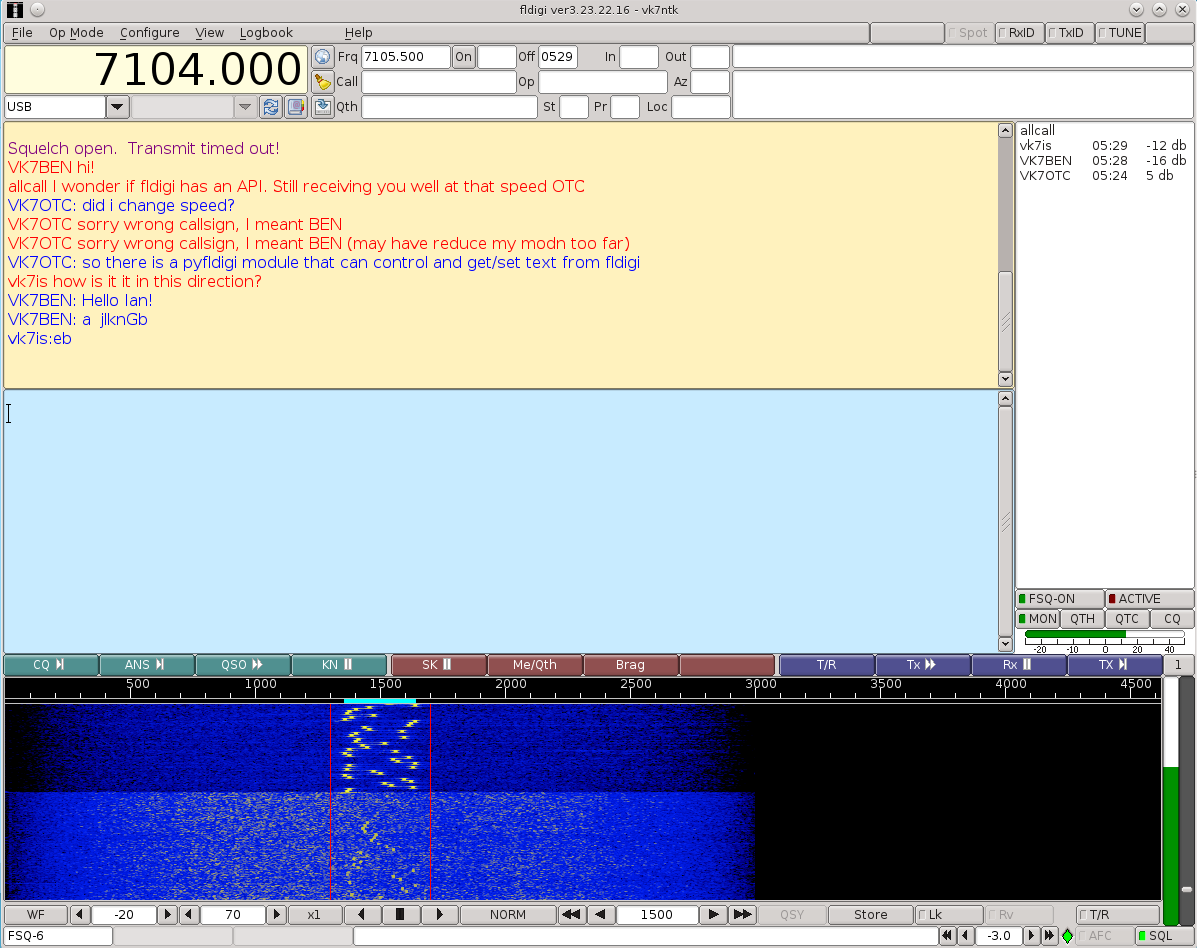 On air FSQ looks and sounds like a faster version of JT65, giving you data speeds of a few characters per second while being able to decode signals right down in the noise.

The main difference compared with JT65 or PSK31 is that the protocol is designed for multiple stations sharing a single fixed frequency. A number of high-level features are built in like saving and retrieving telemetry data, transmitting images, and relaying messages via another station. These are implemented in both the dedicated FSQCALL software and in new versions of fldigi.

Ben and I are physically located in middle of the group, close to the city of Hobart. Ian VK7IS is about 20 km south and Scott VK7LXX about 50 km east.

FSQ is designed for HF and that seems to be where much of the traffic is—in particular on 40 metres at 7.104 MHz (+1.5 kHz USB centre) and to a lesser degree 7.105 MHz. This frequency simply doesn’t work well over short distances and VK7IS and I have a lot of trouble hearing each other.

Over the weekend we’ve been trying 2 metres and this has worked much better. We’ve had success on both SSB and FM but early indications are better results on SSB. The downsides are that it’s much more sensitive to tuning (I ended up having to shift my dial frequency 90 Hz) and you can’t use any old FM radio.

Even with a small vertical antenna and only 5 watts on my FT-817 I can comfortably work both VK7IS and VK7LXX at the fastest speed, FSQ-6. Ian can hear Scott but not the other way around, so it seems we’re pushing our luck with our current setups.

Since I could work both stations this was a good opportunity to try out the relay features. This is built into FSQ and works similarly to AX.25 digipeating—the transmission includes the sending callsign, the destination callsign and the relay station callsign, who will retransmit automatically when they are listening with the FSQ software.

Scott used this to transmit some “telemetry data” via me, which ended up in a file on Ian’s hard drive. This is slightly processed output showing Scott’s original request, my retransmission, then relaying the automatic acknowledgement that the data was stored.

It’s a fun mode with lots of opportunities for experimentation. If you’d like to give it a go either on VHF or HF grab some software and join us on Matrix!