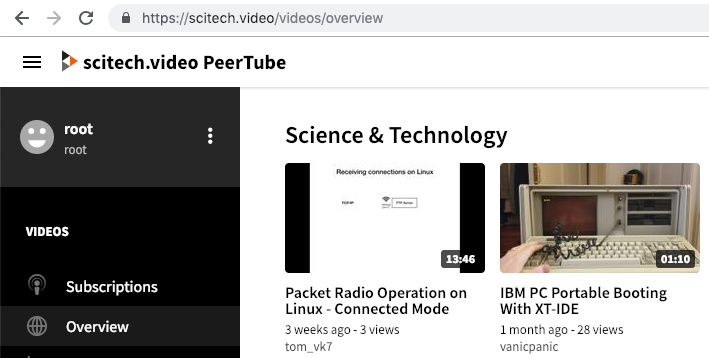 A month ago I made a couple of short videos about packet radio that I wanted to upload. While I don’t mind putting stuff on YouTube, I’d heard some good things about PeerTube. I decided to set up my own server and make my modest contribution of content to the fediverse too.

Since I was setting up a new server I figured others should be able to use it too, and next minute scitech.video was up and running. Since then a couple of people have signed up and uploaded videos of their own. Things are basically going to plan.

Adding to the mess is that many of the major servers all try to follow each other, even automatically (scitech.video is currently followed by 31 other servers without any effort on my part). On the one hand this is cool—we have a big shared corpus of material, accessible via a whole bunch of servers, without any risk-averse corporations stamping their boots on our idealism or kinky stuff or whatever it is that’s against YouTube’s rules… on the other hand, this is so incredibly ripe for abuse. If a terrorist organisation uploaded recruiting videos to a few servers where admins were asleep at the wheel, those videos would probably be available via hundreds of servers for weeks. Yay freedom; but this is not a family-friendly situation.

I’m really not sure what the future has in store for PeerTube. At the same time, I don’t want to sit in my armchair and whinge about a project that’s at least having a go. So I am hosting a server—but I’m doing things a bit differently.

Under my rules, scitech.video channels must be suitable for all ages and related to the “technology” theme. In general I do not follow other servers unless they have the kind of material that I would allow to be uploaded anyway. I have searching remote servers disabled so if you are on the scitech.video domain you can’t view or subscribe to remote channels—you’re locked in to the local and followed videos, which I am able to moderate personally.

This provides two benefits. Firstly, I can mostly avoid becoming responsible for hosting questionable content. Secondly, I offer a PeerTube server that is hopefully “safe” for all ages, most of the time. I think it will be important for the PeerTube ecosystem to have servers you can show to your family without surprising videos coming up. My intention is that scitech.video will be one of those.

And what of my other anxieties? Things like Matrix or Mastodon have a much higher number of messages flying around, many of which are private, and honestly I don’t want to be responsible for dealing with abuse complaints in my free time. Videos come in smaller quantities, are always public, and are easier to keep an eye on. Since the Australian government recently passed the Assistance and Access “anti-encryption” bill, I don’t want to be holding other people’s private messages if law enforcement comes knocking. Host that stuff in some other country.

If you are a PeerTube enthusiast you would do well to think about who your target audience is and how they’re going to receive it. Some users want to see the things they can’t see on YouTube. Many others are pretty okay with YouTube’s rules. They will need to be catered for differently.