Esperanto occupies a strange place in the modern world. Google Translate supports it pretty well and it’s a captions option on YouTube, but you can’t use Gmail in Esperanto. If you have a Linux PC running KDE you can operate much of your computer in Esperanto if you wish. Those with a Mac or Windows have no such luck and require workarounds to even type all the letters.

Most people I talk to claim never to have heard of Esperanto, including many who’ve been exposed via Red Dwarf and didn’t realise it. Now that English has edged out the finvenkistoj to become the world’s lingua franca, the Esperanto project would appear to be a failure*—but its superpower, the thing that gives it such staying power, is that it doesn’t need to be useful. So long as there are bored nerds with a copy of the Fundamento there will be Esperantists. So long as there are Esperantists they will be arguing about it on the Internet.

The Esperanto alphabet contains some strange letters, e.g., eĥoŝanĝo ĉiuĵaŭde. (This means “echo change every Thursday”, a popular but nonsense phrase whose sole purpose is to show everyone that you finally got your keyboard working.)

Fortunately we have Unicode and all of these strange letters are accommodated within the Latin Extended-A block. That doesn’t mean they appear on any keyboard layouts though. For some of these letter plus diacritic combinations Esperanto is the predominant usage, and software companies have not bothered to make them easy to type.

While we didn’t have personal computers yet in 1905, Zamenhof recognised that his creativity might pose problems and he made the suggestion excerpted above: the letter h may be substituted. Thus the h-system was born, along with the fine tradition of Esperantists getting along poorly with technology.

This system has some advantages—apart from being the authentic decree of Zamenhof himself, it’s easy to type and it doesn’t look too bad:

From an English-speaker’s perspective it’s almost a pronunciation guide. But it has problems too: since h is a normal Esperanto letter it’s occasionally ambiguous, and if you try to sort your words alphabetically you end up with your -gh- words sandwiched in the middle of your -g- words.

Thus arose the x-system. You can probably guess how this goes.

No more ambiguity—you can transliterate between real Esperanto and the x-system with complete reliability since x isn’t part of the Esperanto alphabet. Whether that’s a good or a bad thing depends on whom you ask. What everyone can agree on is that it’s spectacularly ugly.

From my perspective the x-system is more popular nowadays although the reasons to use it are slowly thinning. Software that might once only have worked with US ASCII characters is generally becoming Unicode-aware. Custom keyboard layouts are available for every major platform now, particularly since iOS gained support for third party keyboards a few years ago. 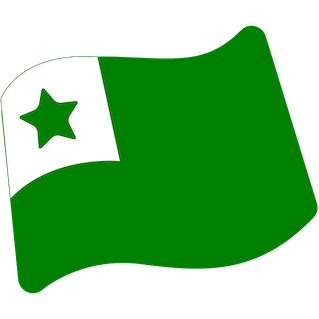 What Unicode doesn’t have is an emoji for the Esperanto flag. Yes, Esperanto has a flag, plus an enduring association with the colour green. But is a flag legitimate if you can’t type it on an emoji keyboard? 🇦🇺

Serious attempts have been made to propose such an emoji to the Unicode consortium, such as this one circulated in 2017. Currently the “Esperanto Flag” is listed in two forms on the Unicode Emoji Requests page with no final decision made. It’s not clear to me to what “larger set” those proposals have been added but it seems we have to wait and see.

Separately, a few years ago there was a change.org petition asking Apple to add an Esperanto emoji flag on their own whim, plus a native keyboard. Despite reaching a whopping 925 supporters I was unable to locate any official response from Apple.

If you want to show your emoji love for Esperanto in the meantime, keep it green, and don’t post on St Patrick’s Day. 💚

* Any of the many raŭmistoj would disagree. This subset of Esperantists prefers to use the language for their own enjoyment rather than care about popularity. This attitude likely explains why Esperanto is supported so well on the Linux desktop.