The National Broadband Network (NBN) is…odd. Pretty much every Australian has something to say about it. I’ve come out of the experience rather well by scoring one of the FTTP (fibre-to-the-premises) connections. This means I have dedicated fibre terminated inside my house at a box with gigabit ethernet ports. Currently NBN has this deployed as OG GPON so my fibre bandwidth is shared with up to 31 other people and my neighbours and I are fighting over 2.488 Gbps of downlink and 1.2 Gbps uplink.

The NBN is by law only a wholesaler. When a customer has hardware like mine the ISP can buy connections from the NBN at a range of speeds up to 1000/400 Mbps. Clearly this would be oversubscribed on the GPON if even a few neighbours maxed this out at once but that’s pretty unlikely. Until a few months ago most ISPs topped out at 100/40 Mbps plans. Even though that’s starting to change, the top-tier plans are still expensive and have limited benefit for most people.

The ISP I use is also odd. They’re named Launtel and based in my state, Tasmania. For one thing they’ve been offering gigabit NBN connections for a couple of years. They also have a web dashboard where you can alter your service on demand. NBN usually takes about half an hour to fulfil any change. I end up charged the rate for whatever was the highest speed I had selected that day. 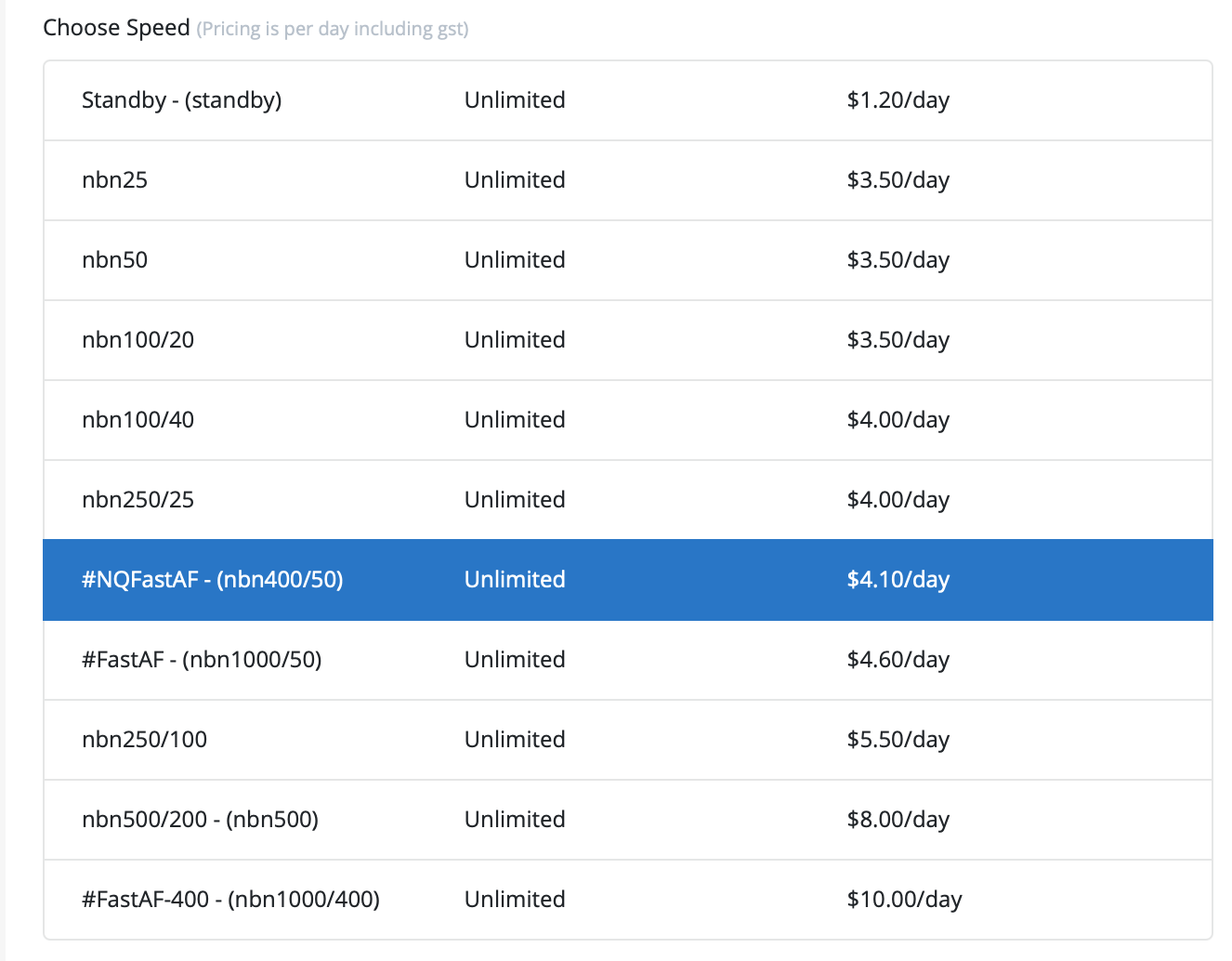 They’ve changed their pricing structure multiple times over the last few years and thankfully it stabilised on something fairly sensible. In the latest version there is no way to get cheap internet. No matter which way you cut it, all of these prices are pretty premium, which they justify by saying you’ll always get the bandwidth you pay for. Still, kind of exxy. On the other hand the ridiculous speeds are not that much more.

For that reason I tend to hang out on a 400/50 Mbps connection. I don’t need it constantly but I often have large files to download or upload for work so it’s awesome having that kind of bandwidth on tap. As mentioned in a previous post, I also host LANs from time to time. When 10 people decide they want to play the same game which is a 20 GB download on Steam, what you really want is a 1 Gbps internet connection. For an extra 50c that day I can buy the upgrade.

The great tragedy of the NBN is that nearly everyone was supposed to get this fibre. Unfortunately a neoliberal government came into power during the early deployment and wanted to save Telstra from writing off all their copper lines. They moved most Australians to a “fibre-to-the node” (FTTN) model where households use their copper telephone lines to connect to a fibre node down the street. They promised this change would mean everyone gets a 25 Mbps connection sooner. This did not eventuate. And for those who got it, 25 Mbps is supposed to be satisfactory for the foreseeable future. It’s wild, but Australian voters have the memory of a goldfish so the grifting will continue.