My experience with Feedback Hub has taken its weirdest turn yet—somebody at Microsoft edited a critical comment that I made earlier this week to simply read “hello there”, still under my name. The comment was not unreasonable, off-topic or anything I’d be ashamed of saying in public. At the end of day it doesn’t even matter—asking a big corp to make changes to their software is unlikely to yield results at the best of times. It’s simply very odd. 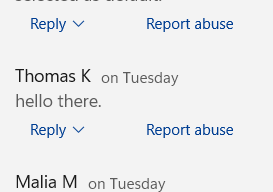 Before I elaborate let me share a little background. Feedback Hub, if you have managed to avoid it so far, is a perpetually-unfinished desktop app pre-installed on Windows. It’s a barebones forum where you can post bug reports or feature suggestions, vote for your favourites and add comments to them. Your activity is associated with your Microsoft account but you have very little ability to track your own actions. For example there is no way to review your past comments without paging through the discussion on each question ten at a time.

Although primitive, it does mostly work and Microsoft promotes this as the main way to get in their ear if you have any problems. Microsoft reps, Microsoft-associated subreddits and so on encourage you to use this tool to make reports. They claim to pay close attention to it even if they’re not responding to everything. This may be true at least in some product groups, although reading around online there is not a strong perception that users are being listened to. I’m a developer—I understand that most software has a backlog a mile long—so I’m prepared to cut Microsoft a little slack, having zillions of users who probably want different things. Maybe they really are plucking out the most important things and acting on them?

I decided to take them at face value and over the last year have submitted maybe a dozen things ranging from simple unambiguous bugs to pie-in-the-sky feature requests. My observations, from most often to least often:

When you start to use it you realise that Feedback Hub is a deeply weird place. Technical people reporting issues in a technical manner are the minority. For any popular submission there will be comments from people having trouble using their printer and a good amount of complete nonsense. I think it’s just a tool that people stumble into when they don’t know how to operate their computers. They click and type at random until something gets accepted and everyone gets to read it.

So most of the time Feedback Hub just plods along being weird. Then Windows 11 was released, and now people have opinions. The W11 taskbar is missing several key pieces of functionality which have incentivised new users to get into Feedback Hub and cast votes. By far the biggest and most controversial submission is about having multiple documents open in the same app.

Previously you could choose to “never combine” apps so you had one-click access to each document. Now you are required to use two mouse actions to open each. This has caused a certain amount of wailing and gnashing of teeth. (I’m none too happy about it myself—it’s a strictly worse implementation of the macOS dock due to the lack of ⌘-` equivalent and the behaviour on first click.)

Compared with most Feedback Hub threads, this one is juicy and relatively coherent. A lot of long-time users are showing up to ask for this feature’s return in a more-or-less demanding manner. I check in on it occasionally to see if there’s been any progress. I once even spotted a Microsoft employee who took the time to raise their concerns on the public tracker:

The “never combine” submission is even testing Feedback Hub on a technical level—on a week-by-week basis it lurches between having several thousand more or less votes, resulting in additional cynical commentary about whether users’ votes are being counted properly or deliberately underrepresented. (I’d put my money on a regular old bug.)

So it is in this context that I made a comment earlier this week. I can’t remember exactly what I wrote but I indicated that after several months of no action I was preparing to move back to Windows 10—unless folks were having success with ExplorerPatcher in which case maybe that would save me some time. Everything I said or mentioned is already frequently discussed on this thread. The point isn’t to be unique; you can’t upvote comments so if you want to show that a weight of users have the same perspective you all have to post it.

I thought somebody might have replied to my musings about ExplorerPatcher so I scrolled back today to find my old comment. “hello there” from Thomas K on Tuesday. Unsurprisingly, no replies.

I mentioned earlier that you can’t track your own comments. The UI is extremely basic and I can’t see any metadata about each commenter. It is technically possible that my comment was deleted outright (without notice) and a different Thomas K posted a spammy message on exactly the same day. I say this just to be thorough but it seems even less likely. Simplest conclusion: some MS staff member took issue with my message in particular and modified it without telling me.

You might suspect I’m (irrationally) angry about all this, especially having written so many words on the matter. I’m really not, just bemused. Everything about this tool, the people on it, the way it’s operated is so flipping strange. I don’t expect anything to change. At the end of the day you just have to chuckle, close Feedback Hub and install ExplorerPatcher.