Regular readers might recall my deep-dive into the bizarre world that is Microsoft’s Feedback Hub. I thought I was finished with that topic but today I spotted something that warrants a brief followup, some non-anecdotal evidence about whether this feedback process might actually be worth one’s time.

Opening Feedback Hub on a newly installed computer, the following popup explained how Microsoft will use my information. Pretty boring stuff except for this part:

Your submitted feedback will be retained for 15 months at most, from the time of submission. 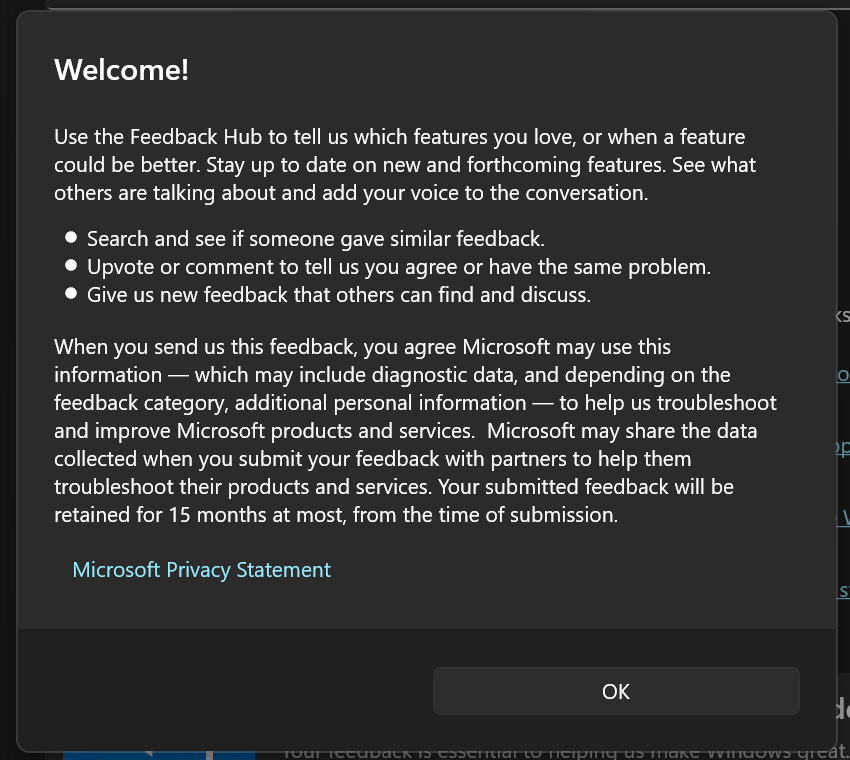 Any programmers who’ve had to deal with “stale bots” on GitHub will already be rolling their eyes. It shouldn’t have to be said in 2022 but here we are: just because a software problem is old doesn’t mean that it’s unimportant or irrelevant. You lose context, and someone who newly stumbles across the problem is gaslighted into thinking that it “must just be them”.

There’s no good reason why Feedback Hub data needs to be kept for only 15 months, instead of requiring an indefinite licence to retain and use the submissions for improving Microsoft products. Unless… 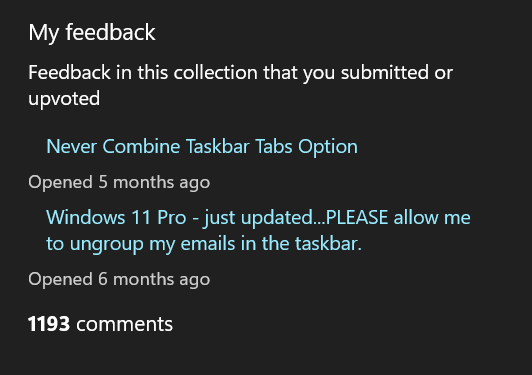 Under this policy, Microsoft is required to start deleting feedback submissions about the defective Windows 11 taskbar in the next 9 months. They have stonewalled and avoided making an official response to this issue—even an unpopular one—for the last 6 months. Perhaps the strategy is to let people vent now and hope that few will notice when the issue quietly disappears.

The conclusion is clear: use Feedback Hub if you want to, but also or preferentially document your concerns on websites, forums and persistent forms of social media.

I rather like New Microsoft, honestly. If Kubuntu was a better daily driver for me I wouldn’t be thinking about this in the first place. Alongside the solid work in programming tools and open source they’ve been fleshing out their personal/family offerings to slowly close the gap with Apple. It has the potential to be a competitive integrated consumer platform without the hardware lock-in or the piecemeal Linux experience. There are just a handful of terrible decisions that make me groan. The W11 taskbar is one. Photos has… issues. The intrusion of ads and promotions into Edge from the vendor is absolutely backwards for earning user trust.

I won’t be blogging about any of this any more. But when I have the urge, I will be writing up some detailed “bug reports to Microsoft” as a separate section of this website. I’ll be able to format them nicely with lots of pictures, and most importantly I can mark them “closed” on my own schedule.